A child is speaking. She is not a Swede, her hair is not gathered in plaids. Her name is not Greta Thunberg but Severn Cullis Suzuki.

In 1992, the young Canadian climate activist addressed political leaders during the Rio Earth Summit. In a speech strikingly similar to that of Greta Thunberg at the 2019 UN Climate Summit, she called for political action in the face of urgency.

Climate activism is not novel, nor is it the whim of generation Z, nevertheless, academia lags behind in coining its genesis: it has no History.

Youth climate activism bridges many social struggles. A most profound inspiration is the Environmental Movement birthed by the Industrial Revolution. As an objection to the industrialist city, it won its first battle in 1860s Great Britain. Under the advocacy of the Plumage Group, one of the earliest civil society organizations to fight for Earth’s safeguarding, the Sea-Bird Preservation Act was adopted. Dormant during the two World Wars, environmental activism awoken when the cold war struck. In 1965, President Lyndon B. Johnson’s Science Advisory Committee published a report: Restoring the Quality of our Environment. The link between the environment’s deterioration and human activities was first established. The report suggested economic incentives to discourage pollution. It inaugurated a decade of great significance for Youth climate activism. 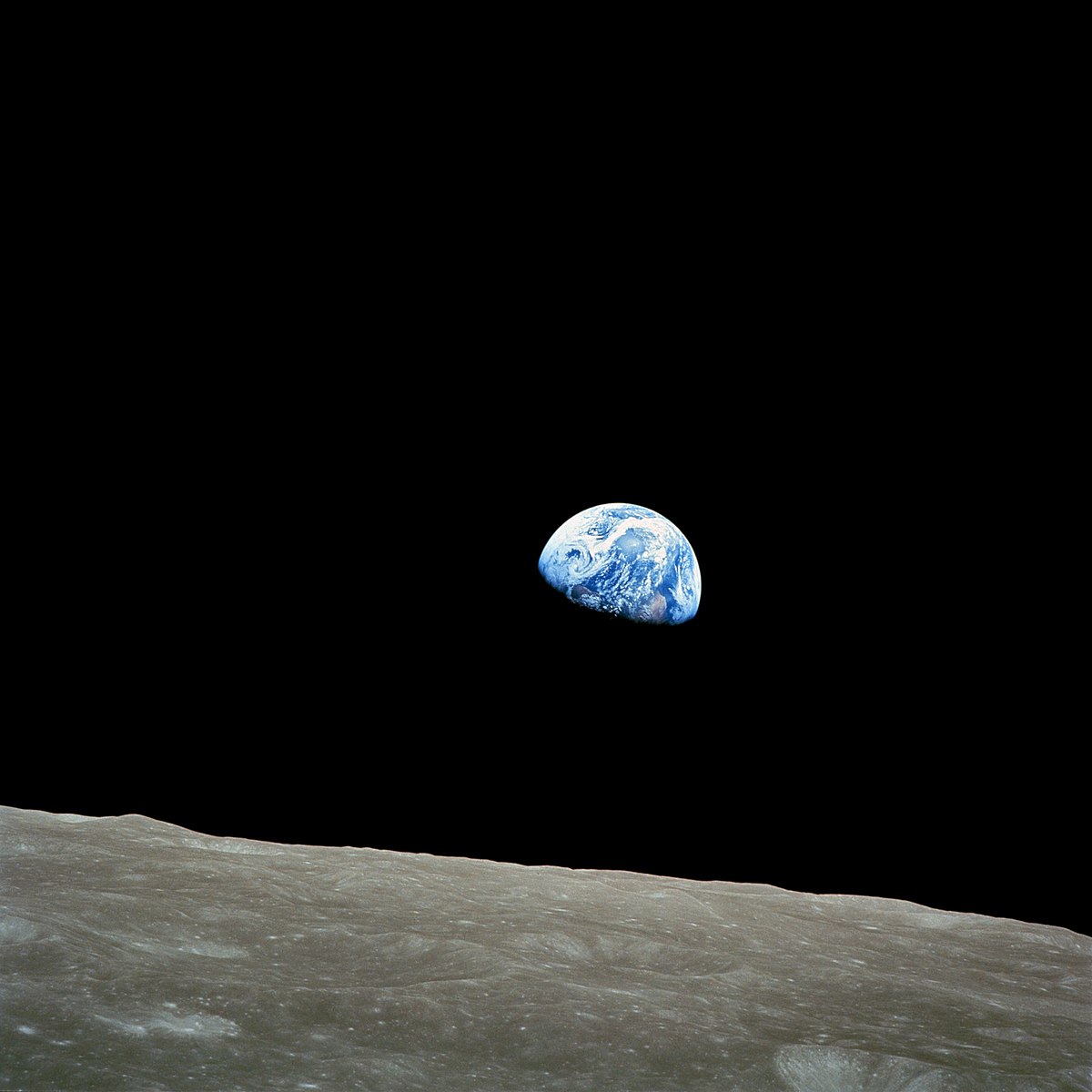 Do you recognize this photograph of our planet?

In 1973, Earthrise changed the world and visual communication forever. The photograph is the first colorized capture of the Earth, taken by a human being from lunar orbit. The author, William Anders, reflects on its impact: “We set out to explore the moon and instead discovered the Earth”. Suddenly, the totality of humanity was made visible. The shared knowledge of humanity’s vulnerability and tininess in the vastness of the cosmos arose the sentiment of shared destiny. In 1973 the oil shock struck, it forced individuals to halt and question their economic model’s durability.

The 1970s acted the convergence of causes, a transition where social issues were all at their paroxysm: the belief in the end, or in the change of History, was in the streets. Climate justice activism really started during a crucial interval. The first Earth Day took place in 1970, strong of the veterans of the civil rights movements and anti-war protests, students, for the most of them. On the 22nd of April 1970, 20 million marched for Climate Action, a crowd never seen again in a protest against climate inaction. In 1971, Greenpeace was founded, many activism structures followed in its footsteps.

Scientific breakthroughs supported the tightening of activism networks, after years of researches and controversies over the greenhouse effect or the Club of Rome’s infamous report The Limits to Growth, the term climate change was finally coined by Wallace Broecker.

As the decade was beginning to dip, the 1980s profiling on the horizon, a political shift came along and stilled climate activism’s momentum. Margaret Thatcher and Ronald Reagan were elected. Together, they buried the hopefulness of the 1970s’ activism and buried it under the weight of neoliberal ideologies, which, to this day, dominates the world economy. Faith in a self-adjusting world and limitless resources destroyed the argument and call for action of climate activism.

Activists had to wait until the 1990s to see once again climate change linked to human activities, and, most importantly, to an economic and societal model.

The Rio de Janeiro Earth Summit revitalized Youth climate activism. Suzuki’s speech inspired, it affirmed the youth’s ability to shake the consensus and be at the starting point of political awareness. It forged the image of the child as a herald.

Youth climate activism inherits from these two parents, it explains some of its characteristics, such as an insistence on communication, and its use of social media platforms.

What sets it apart? If we listen carefully to Aristotle, Youth activism has always been the same.  “Youth have exalted notions because they have not yet been humbled by life or learned its necessary limitations, moreover their hopeful dispositions make them think themselves equal to great things. All their mistakes are in the directions of doing things excessively, and vehemently… They love too much, hate too much”. There is indeed something extreme about the actions and speeches of current young actors. Max Weber resolved the tension and summarized his thought in a truism: young individuals are the inheritor of the future.

They have thus developed an ethic of ultimate ends. In Politics as a Vocation, Max Weber describes it as the situation where an individual does not act rationally but according to ideologies. Hence, the gap between their ideals and real-world events urges them to action. This dissonance is often perceivable in testimonies of young climate activists reflecting on where their motivation stems from an inability to understand the world and an impression of being governed by irrational actors.

Youth climate activism is highly individualized. It puts an emphasis on individual responsibility and agency. Such characteristics explain that activists are recognized as individuals and not as part of a group.

In an interview for The New York Times, Greta Thunberg argues that young climate activists are militating for a new ecological rationale, departing from misleading positive affirmations on humanity’s capacity to act for climate resilience. More so than neutrality, she calls for realism - that some identify as catastrophism. Indeed the new rationale is founded on a pessimistic apprehension of the future. This in turn fuels anxiety. The inability to envision a better future than that of the previous generation does set the current youth and current young climate activists apart. It fundamentally clashes with the tenet of our modern societies: the idea of progress.

Unraveling Weber’s concept of ultimate ends, the young activists are mistrusting, especially when it comes to institutions and older generations. This is the result of a more profound, ideological disillusion arch. At the height of the subprime crisis and the ensuing Occupy Wallstreet spark, the 90% believed that history was moving forward: the western world was undergoing a harsh but necessary mutation. However, the new age was late to dawn … A similar deception grew in the Arab World following the failures of the Arab Spring. Despite tremendous hopes and actions, the majority of the revolts led to authoritarian regimes in Northern Africa and the Middle-East.

Thus, young climate activists are the latest generation striving to put down a world and give birth to a new one. They attack the very core of capitalist societies: competition. And they do so by making demands. Cornering the characteristics of juvenile engagement, Geoffrey Brei argues that the youth synthesizes a new kind of activism: alteractivism, inaugurating a new relationship to democracy. Alteractivists understand democracy, not as an institution, but as a series of revendications that must be met. It is sporadic and vertical: alteractivists issue commissions that governments have to meet to remain legitimate.

Raluca Dumitrescu, Head of Sustainability at GEYC insists that youth climate activism - despite the coronavirus pandemic, is lively, adaptable, and led to concrete social impacts. First, it contributed to raising global awareness on the pressing issue of climate change. Hard to quantify, heightened awareness created a context favorable to climate actions and forced the attention of world leaders, as well as enhancing civil society’s scrutiny over climate-related public policies. The Paris Agreement, as well as the Urgenda Climate Case Against the Dutch Government’s successes certainly benefited from public pressure impulsed by youth climate activists. Raluca Dumitrescu adds that Youth’s voices are now heard in forums or authorities where decisions are taken. For instance, at the UN Climate Summits, or in national assemblies. Young activists are also setting up political parties to participate more directly in the decision-making process. In Germany, Klimaliste was founded by Fridays for Future’s campaigners and is on the ballots of local elections, with the hope of impacting the election year.  Raluca Dumitrescu points out that these activists are proposing a concrete answer to political apathy, which runs rampant in the European Union with the collapse of youth participation in national elections. Finally, youth activism, as a whole, contributed to turning virtual platforms into forums of political and social debate, concludes Raluca. This capacity to experiment with democratic processes online has been accentuated by the coronavirus pandemic.

However, as the fight is ongoing, impacts are rare and poorly visible. Greta Thunberg, answering to the New York Times’ skepticism, is fast to remind that those needing to make the decisions are the adults in office. The Swede admits bitterly that children are applauded, and needed actions are not taken.

A different reading could be more critical: youth climate activism is mainly performative, as private firms are charged with greenwashing, adolescents may be guilty of Hashtag Activism. Some of the undeniable energy of youth climate activism might result from a desire to perform an identity, at an age when individuals are acutely sensitive to peer pressure and social status. All the more when it gives them the opportunity to lecture adults and reverse the dynamic of authority.

“Climate activism has moved millions of people to action. How do you move millions more ?” Greta Thunberg